Imagine Cup Armenia 2012 announced the national winners at the Awards Ceremony in Golden Tulip Hotel on May 2, 2012. 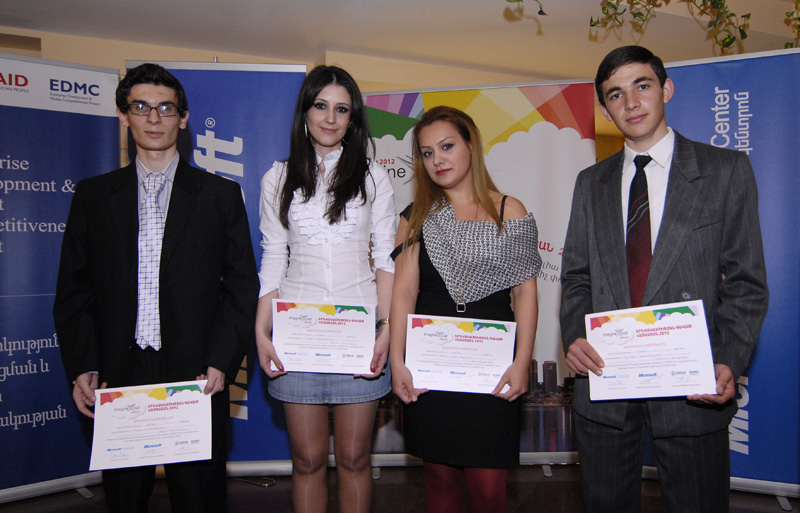 Imagine Cup Armenia 2012 announced the national winners at the Awards Ceremony in Golden Tulip Hotel on May 2, 2012. Mr. Armen Ashotyan, Minister of Education and Science, as well as a number of ICT, private sector, educational and non-government organizations’ representatives were present at the event.
Seven finalist teams pitched their innovative technology ideas to the grand jury comprised of leading technology and business professionals in Armenia. In result of deliberation, the jury selected the three winners  of the competition, respectively:

1st award: mLab team with its drinking water quality test project, which allows every mobile user to check the quality of drinking water, retrive statistical data on the level of pollution, and make the data available to other users worldwide.

2nd award: The Insanely Great Team for its anti-counterfeit system suggesting that producers include a secret code in the label of the  product to allow a two-step verification of the product by the buyer.

3rd award: RAU team offering a Windows Phone application which will identify the dangerous additives in food products and provide information to the buyer.

All winners received significant monetary and prize awards from organizers and sponsors of the competition. The first award winner mLab team will represent Armenia in the international Imagine Cup Contest which will take place in Sydney, Australia, in July 2012.

Start scaling your business with technologies.

Get started on your next project with us.